With a break from the traditional Christmas red and greens, this year we created a Santa soft toy knitting pattern to rival the rest. Santa on Boxing Day is how you might imagine him after the busiest night of the year delivering lots of gifts for the children.

He has a comfy cardi, trousers and hat that are all made separately. He can be dressed and undressed.

Standing at 50cm tall he is a larger than life toy so if you are planning to make him, you will need lots of toy stuffing.

It took the designer three weeks to create and knit the first one and he became a real labour of love.

“I knew he would be big but he just kept getting bigger, he has a big personality to go with it too. He has really big features so the only real challenging details were adding the eyes.” Says Vicky.

“I loved him so much that I decided to adopt him and keep him to show off at Christmas after he was made. I just couldn’t bear to put him away”

He is made in the usual Knitting by Post style with an easy to read pattern and pictures along the way.

If you like a longer knit and big toys then he is for you. He is large enough to get your needles going for a long knitting session.

“Our choice of acrylic yarn is something that we think about a lot. There are advantages and disadvantages to it. We use it because it is affordable and readily available. The colours are vibrant and the yarn thickness is consistent”

Even though he is made so big, the pattern uses 3mm single pointed knitting needles.

“3mm needles with double knitting yarn can seem odd if you are used to making garments” says Vicky. “The reason that we do this is to make sure when you have finished knitting and begin to stuff him that the toy stuffing doesn’t show through.” she continued. 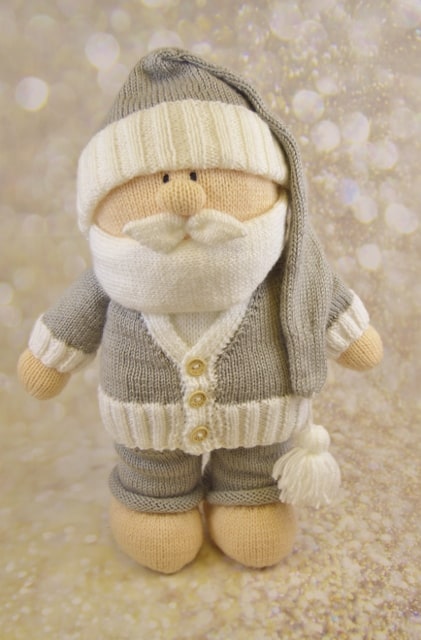 Here is Santa on Boxing Day. With a break from the traditional red, he is relaxing after all those Christmas deliveries.

Spend £10 or More on Knitting Patterns and Get FREE Delivery